Rovers will be looking to take the positive vibes from Tuesday night into another big game on Saturday when we host Oldham. A win would reinforce our place in the league 2 front runners and help us move on even further from the poor display against Stevenage which was hopefully a one-off.

The visitors currently sit 17th and have been inconsistent having lost 13 games this season, but winning 10, so are capable of picking up a result. Despite losing Danny Rowe to Bradford they still have goals in them with McAleny and ex Wrexham man Bobby Grant both on the scoresheet in their 4-3 defeat to FGR on Tuesday.

The big question is whether Keith will make any changes after Tuesday night. My guess is not really, unless enforced. After the Grimsby call off apart from half an hour on Tuesday night, the likes of Spearing, Clarke, Feeney & Vaughan have not played since Stevenage so should be fresh. I’m sure Clarke will return so the question is whether Ray could replace Manny which some of the SWA would prefer. George had an excellent game on Tuesday, but Manny helped keep the clean so suspect he will start but could be borderline.
O’Connor will only start I think if Khan isn’t fit. So if all fit I’m guessing something like:
Scottie

Woolery – Vaughan – Lloyd
The bench should look strong and there will be some half decent players who don’t make it. Expect CBT to be up in the main stand again and hopefully whatever the result we see a bit of what Nugent can bring to the table.
Prediction: a hard fought win.
Last edited: 18 Feb 2021
A

3-0 with a late Nugent brace
A

I don't see CBT playing any time soon the team are playing well and he has been out of order, has to pay his doos

aldoes mustache said:
I don't see CBT playing any time soon the team are playing well and he has been out of order, has to pay his doos
Click to expand...

I agree. I don't really understand all the calls for bringing in CBT. We are doing fine without him.

Ian said:
I agree. I don't really understand all the calls for bringing in CBT. We are doing fine without him.
Click to expand...

Yes I agree, I just meant it shows how strong our bench is if he isn’t involved, even if he has apologised to Hill.

Given Tuesday’s bounce it would be a huge disappointment not to be able to carry forward the momentum and beat Oldham at home. The pitch should be in good nick after milder weather and an eleven day break. We have a virtually fully fit squad available, so no excuses. All we need is just a bit of the luck we had at the Manor and we should get three points.
Keep the Faith!
A

Khan the only doubt but other than that everyone is fit

bigmart said:
Think will be a tough game but we will edge it 3 2
Click to expand...

No, please, not another nailbiter.
Keep the Faith!

I agree with most of Sparky's summary. I think the team will be as he suggests and it would be good to get Nugent on the pitch at some stage.

Oldham have a very good away record and have a real attacking threat, with both McAleny and Nicky Adams, who they signed in January. However, they are porous at the back and you would think we could exploit their defensive weakness in our current form.

I think it is vital we win this game as we have some very tricky away matches in the next few weeks, and there is a danger we will lose touch with the top three if we don't get three points.
A

all we want is a good team performance and result, think Nugent will play the last half hour and get the late brace I said before, I would love the little Messi Woolery to get the other, just wish I could see the lads play

Oldham, given their basket case owners, have done better than I expected this season and currently lie in lower mid-table. By all accounts, they were unlucky not to get something from the trip to Forest Green and as already highlighted are capable of scoring on their travels. Don't think we've drawn a home league game this season and wonder if that might change Saturday.

Wouldn't be surprised to see the side Sparky suggests and also to see Nugent get some game time from the bench.

I have seen a few calls elsewhere for Ray to start ahead of Monthe today. Not for me. I think Manny was back to his best during our recent winning run. He made a couple of small ricks on Tuesday night, but I still think his pace and one v one defending complements Clarke and they are our best centre back pairing (when Manny is on form).

Yes, I agree. Monthe and Clarke are our best two at the back.

Agree with RLC and Ian. While I think there is some advantage in playing a left-sided player like Ridehalgh if Manny unavailable. However it demonstrates how much Ray has gone up in fans estimation as very few would be suggesting him to replace Manny last season.
A

Kahn and Lloyd both out injured and replaced by O'Connor and Morris. Lloyd is quite a big miss, hope it is not serious.

CBT back on the bench. 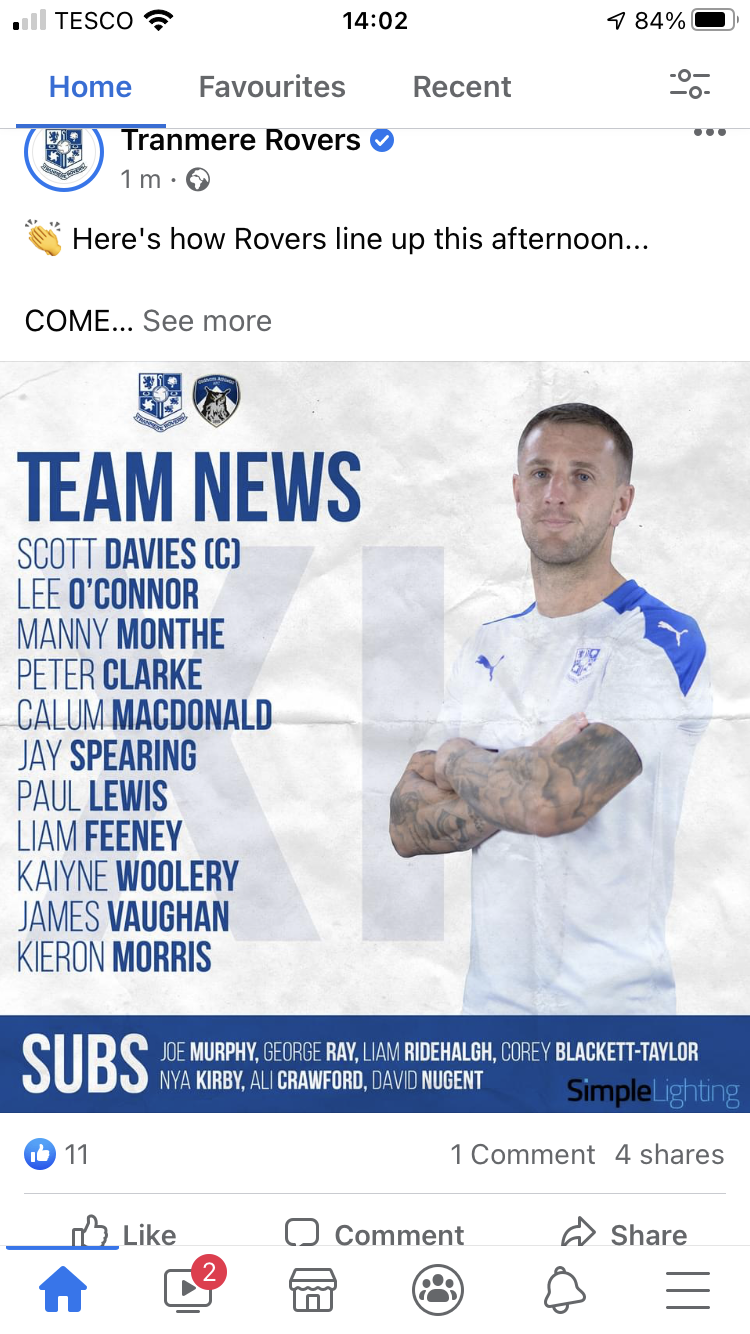