Just watching Jacko on the sidelines. Thought he’d be ranting and raving considering his job is on the line but as much as I like the fella, he looks a bit lost. His assistant Dawes doesn’t look much better either

Got to e the end for Jscko now as we are in a relegation battle never mind look towards top end the table.

No reaction, no improvement from Tuesday.
Do the right thing Palios. 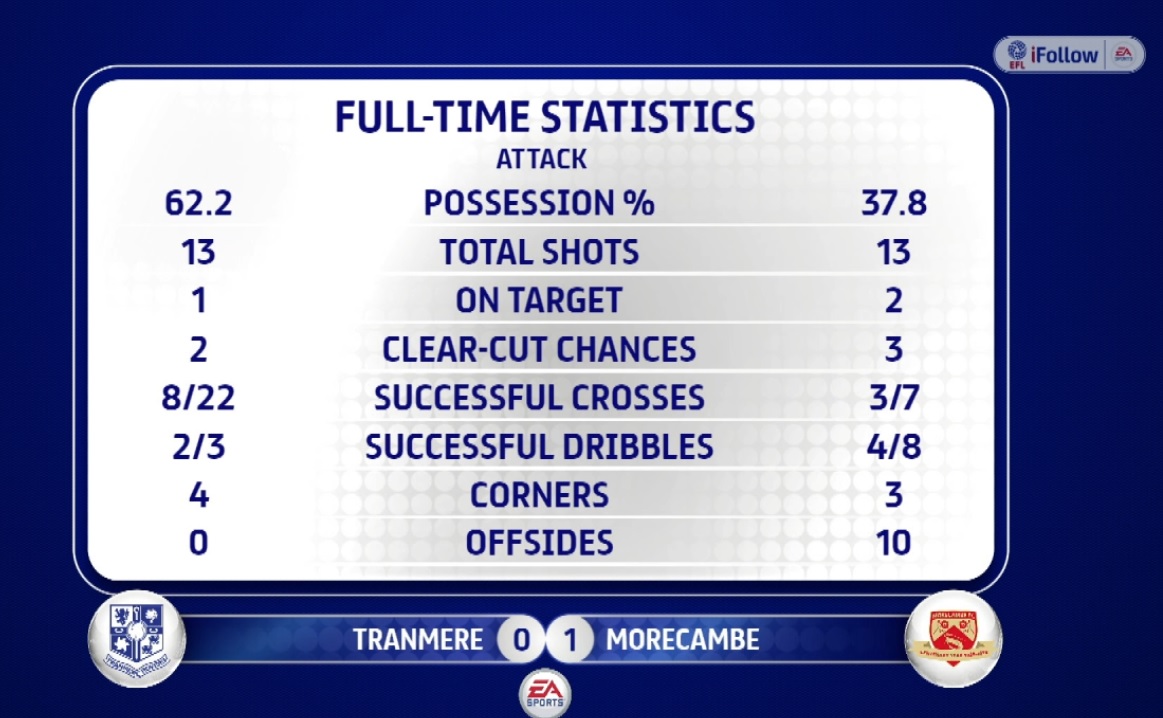 A more positive opening twenty minutes, but ultimately yet another unacceptable display.

In the early stages we did get the ball down and play, with Banks having a decent game and MacDonald making some impressive overlaps on the left. However, for all the possession we created virtually nothing again, with Woollery spending more time drifting out to the right wing than supporting Vaughan in the box.

As soon as Morecambe pressed ten yards higher up the pitch, the cracks appeared. We were lucky not to concede before half time, with awful defending from, first, Monthe and Davies and second, Clarke and O'Connor, gifting them good opportunities. The same hesitancy at the back was evident in the second half, with half-hearted challenges and failure to pick up runners, and Morecambe had missed a couple more opportunities before they deservedly took the lead.

In terms of our use of the ball, the second half was woeful; completely disjointed, with any pattern of play disappearing. Vaughan was unlucky with a couple of good efforts - he must be wondering what he has done to deserve to be playing in the this side - but our threat in the final third was virtually non-existent again. The only positive I can think of is that CBT looked quite sharp when he came on.

I can't see anything changing while Jackson remains in charge.
C

Surely thats it, come on MP, enough is enough. This is torture to watch!

No reaction, no improvement from Tuesday.
Do the right thing Palios.

Absloutely. Something has to change, or relegation becomes a real possibility.
A

MP knows what he must do now. Nothing else to be said.

Very disappointing second half from Rovers. The game plan wasn't changed to suit the subs, too many aimless balls in the air. I don't think, debatable though the penalty was, that we deserved anything from the 90 minutes. Arguably there are enough sides worse than us to make relegation unlikely, but continue to play in this vein and it will be a close call. Is that really acceptable to the Palioi, as it certainly isn't for the supporters.
D

I am very sad to say it but Jacko must go. We do not want to be fighting to avoid the NL again.
K

no idea where we go after today by all accounts nelson seemed to be the only player interested at crawley yet gets dropped also giving davies the armband appears to make him undropable, now I,m not blaming these two players as they all appear to be in the same boat but as we cant get rid of an entire squad so we either cross our fingers for a turnaround or change the manager, my concern is we keep getting beat to the point where the players just accept it
A

if Mark goes the way he does he won't do everything soon. but you have to question 1 thing what does mark used as a template for a manager he has not had a great record apart from Melon and lesser Brabin. Not that I'm having a go at Mark he and Nicky have done an amazing job with Rovers but it's not going too well and now MJ needs to go. But what will the country lockdown mean no sport we wait and see
A 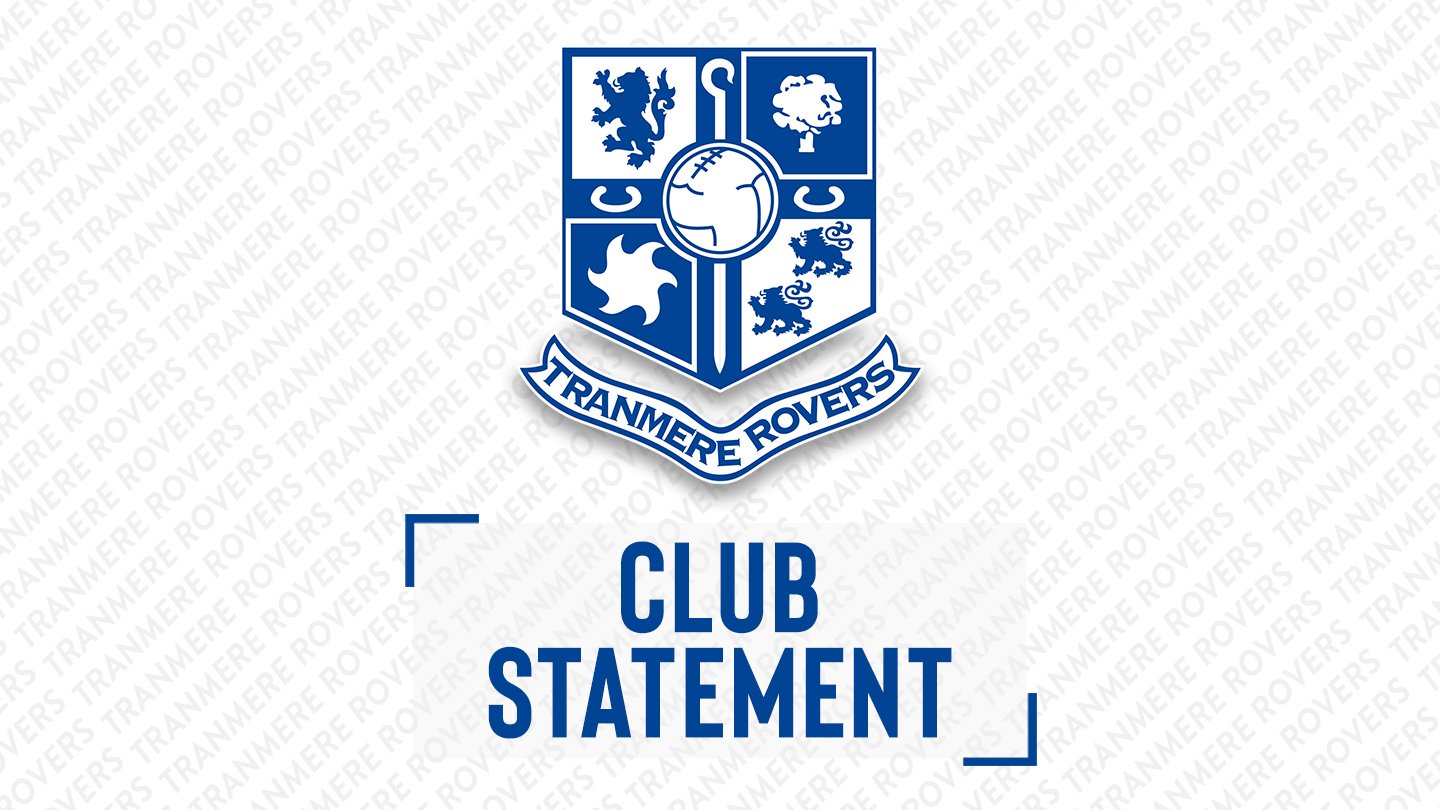 i do feel for mike but the Right thing has been done. now mark get it right
M

I think Jacko might of got a bit longer in League 1 but the Chairman can't really take any chances , going down to the conference again would be a nightmare. Jacko has been part of our climb back into the league , lets hope that he is remembered for that and that he and gets a new post soon. But, averaging 2 shots on target a game is always going to put you in trouble. Lets hope that Mark has already got someone lined up, someone who knows this Division , someone who can get Vaughan some service.
H

Hope it's not an obvious candidate.
The bloke at Raith Rovers doing well in the Scottish Championship and did well under Brendan Rogers at Celtic.

The first game I have watched for a while and for the first 20 minutes I was wondering what all the fuss was about! I spent the remaining 70 minutes understanding it. No consistency in the team selection and no understanding of how to improve the tactics on the pitch. It felt just like the season we were relegated to the VNL, throwing the dice on team selection and hoping for the best with the inevitable result.

I think ONIGP the throwing of the dice was the problem. One up front didn’t work, then two up front didn’t work. He dropped feeney our most creative player and then brought him on when things weren’t working.
On paper he made Some good signings and some eg spearing have been a real disappointment. Others such as Woolery and feeney haven’t been totally fit. Then we had the likes of Scottie and Vaughan isolating so I do have some sympathy for Jacko.

Personally, I don't think the COVID disruption had a significant impact on performances. We were as poor in some of the games prior to the outbreak (Cheltenham) as we have been recently, and I think the real issue was the lack of any kind of tactical plan or style of play.

If you are well organised, you can lose three or four players but still put in a professional performance. We were never organised or professional.

I personally think it is unfair to judge any of the players until we have seen them under a better manager, including Spearing and O'Connor who seem to be the current scapegoats.

The problem with O'Connor yesterday was clearly down to the manager, early in he got in a good cross but after that he rarely got much over the half way line and kept looking sideways or backwards when on the ball clearly under instructions from Jacko.

Rockfords Love Child said:
I personally think it is unfair to judge any of the players until we have seen them under a better manager, including Spearing and O'Connor who seem to be the current scapegoats.
Click to expand...

That's a fair point actually and I would hope it's fair to assume they are a lot better than what we have seen so far!
You must log in or register to reply here.
Share:
Share
Menu
Log in
Register
Install the app
Top