A superb performance from Rovers.

It is incredible the impact Dawes has made in a matter of a few weeks. From having no clear game plan, we now have an obvious pattern of play with Davies bowling the ball out from the back and the ball being passed through the thirds, a style which suits this group of players perfectly. The caretaker manager and the players certainly seem to fit hand in glove. We are creating chances at will, and all of the attacking players are performing with supreme confidence.

I thought everybody played well. CBT tore their defence to shreds and is finding the consistency that he lacked last season, but I thought Spearing pushed him close for man of the match. His use of the ball was excellent and he protected the back four with vital blocks and interceptions on numerous occasions. In fact, the whole team worked incredibly hard to win the ball back when we lost possession. Otis Kahn looks like the player we thought we were signing in the summer, taking players on and now scoring goals. Morris is back to his best. I was also really impressed with MacDonald's composure on the ball; he looks a natural footballer. Ferrrier and Lewis both did well when they came on, and the competition for places is fierce.

Grimsby actually had a couple of lively youngsters up front, but defensively we were untroubled and I don't think the opposition had a shot on target.

If the alternative to Dawes is A.N.Other journeyman manager, just give the job to Dawes.

aldoes mustache said:
Port vale had a man sent off. Kevin Ellison scores in 96th min they lose for two weeks in a row
Click to expand...

Three in a row, as they lost in midweek as well.

Very good performance from Rovers. I didn't think Grimsby were that poor a side, showed some nice touches in attack, but we were clinical in the first half. Think I'd have given Spearing MoM for an all round 90 minutes performance. Corey had a great first half, but had two men on him for most of the second. Great cameo from Ferrier too, wish he played like that all the time...
K

it's also good that the goals are being spread out

How many caretaker managers have won five games out of five? Even new managers rarely achieve that.
Keep the Faith!
A

Terrible performance - sack the Manager! Sorry couldn't resist having seen the news already re Hill coming in.
Excellent first half - naturally they eased off in the second but still looked comfortable. Some of the interplay and short passing was really a lot lot better than you would expect to see at this level.
Totally agree how good Spearing was today - seeing how some of his perfomances were under Jackson he must have been seething with the way we/ he was being asked to play! Couple of vital blocks when Grimsby threatened with a couple of long range shots. CBT electric and with 5 subs now allowed it plays really well for him as he can simply target playing 60 minutes at full tempo safe in the knowledge he can be replaced every game now (much as all the props do in Rugby). Khan also now showing his class - thought he was excellent as was Morris. McDonald is also so much better now he is also freed up to go out and actually play football - he is a quality footballer. My only criticisms - Manny was careless a few times with his passing and gave the ball away needlessly whilst Davies who was distributing the ball really well in the first 60 minutes sadly reverted to type and started hoofing balls long which meant we invariably gave the ball back to them. Unnecessary.
Automatics by the New Year is surely the target now - no reason why they can't do it playing like this.

Top performance that was, some of the passing was excellent, everybody played well but Spearing did all the dirty work and just gets mom for me.

bring back the cowshed! said:
Hope the team gives Dawes a good sendoff and doesn’t go flat.
Click to expand...

Yes I’ve been impressed with McDonald who has great technique and a decent range of passing. A good ball in for the first goal too.

you do wonder about monthe. I read that he’s one of our quickest players and he’s so strong he should be at a higher level - but it is probably his concentration that let’s him down at times

Sparky said:
you do wonder about monthe. I read that he’s one of our quickest players and he’s so strong he should be at a higher level - but it is probably his concentration that let’s him down at times
Click to expand...

Yes, I think as a classic defender he is great. Decent tackler, great at shielding the ball, difficult to get past and is really quick for a big man. However, I think he's too laid back at times and his passing is sometimes frustrating. Whether that's down to concentration possibly but in a system where we spray it around at the back, I'm always a bit weary when he has the ball. He wants to take too long on the ball and whilst that is probably fine at this level, it becomes a problem higher up the leagues when time and space is more of an issue. Having said that, I do enjoy watching him.

Need bbc sounds to to log in but refreshing to hear a manager asked some tough questions for once! 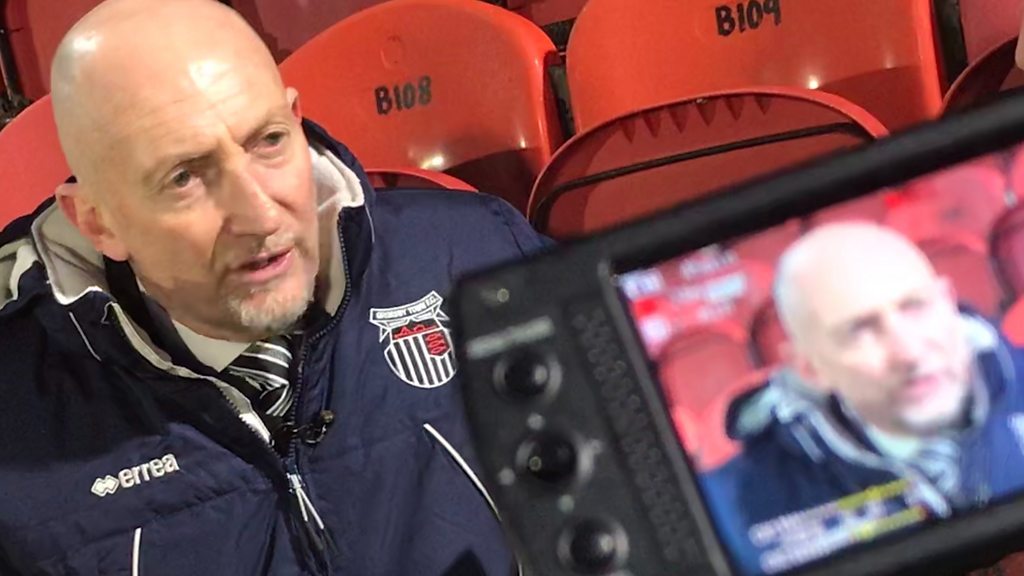 Ian Holloway talks to John Tondeur after a defeat in League Two.

Sparky said:
Need bbc sounds to to log in but refreshing to hear a manager asked some tough questions for once!

Ian Holloway talks to John Tondeur after a defeat in League Two.

Thanks, Sparky. A good honest opinion from Olly.
Keep the Faith!
A

bring back the cowshed! said:
Thanks, Sparky. A good honest opinion from Olly.
Click to expand...

Thanks Sparky, always liked Holloway, he always speaks his mind and says it how it is.

Boz said:
Seems from hearing that the Grimsby scout should be axed as we’ve played 4 diamond 2 for the last few games
Click to expand...

Yes that made me chuckle. A nice bit of naming and shaming!

Boz said:
Seems from hearing that the Grimsby scout should be axed as we’ve played 4 diamond 2 for the last few games
Click to expand...

Surely Holloway could have worked that out by watching a couple of games on Ifollow ?
D

Rockfords Love Child said:
Surely Holloway could have worked that out by watching a couple of games on Ifollow ?
Click to expand...

Ian Holloway has had some success in his managerial career but Grimsby would not be a job to kept at. A pre-retirement gig?

Interesting that neither Spearing or CBT make the EFL L2 team of the week, though Khan and Vaughan feature.
You must log in or register to reply here.
Share:
Share
Menu
Log in
Register
Install the app
Top