They are coming into a bit more and sub Taylor is winning his share of headers. Keith still content though. Nerve wracking

Ellison on as the visitors go for it. Worth bringing Manny on?!
H

I was thinking Rides or Manny earlier. If we can't keep the ball better we might as well beef the team up a bit more with Manny as well - if it is turning into that sort of game.

Well thank god for the final whistle! That was nail biting. Although we defended well at 1-0 you never know what might happen. Need to remember that Newport were top for quite a bit and are an effective team even though they are ugly to watch. We dug in when we needed to although I would have liked more in the final third from Morris and Nugent. MOM for me was Feeney with the only real moment of quality but credit to the back 4 for the clean sheet. Some good results for us tonight and on we go to Saturday.
H

Phew. Three hard fought for points there.
Credit to the back four for the clean sheet.

An ugly game of football but a huge victory. Newport are a horrible side to play against, and it is virtually impossible to get a flowing, passing game going against them. As soon as you make the second or third pass you are wrestled and fouled. However, I thought we stood up to the physical challenge well and the back four were superb. Newport pumped a lot of balls into our box but did not really create anything of note, and on the few occasions when we could get some attacking momentum we looked the slicker, more dangerous side.

I thought George Ray was arguably man of the match, despite his near horror moment in the second half when he gave it away on the halfway line, but Clarke was also immense. I lost count of the number of blocks and interceptions we made at the back. Of the attacking players, I thought Morris was decent and Woolery looked really sharp again.

On to Saturday, where victory would surely see us nestle nicely in the automatic promotion places.

A fairly scrappy game which we all predicted for all the ball they had they didn't really threaten much and to me are fairly limited and Maynard is well off form.

On the occasions we passed the ball around we looked good but too often it was like a hit potato though I dont think the pitch helps as it was bubbly. Clarke my mom.

A good team gets a result from a match like that. As ever, some strange results elsewhere. We are still fourth but in a much stronger position as Cambridge, FGR and Carlisle all lost and Exeter only drew. If we win just one of our games in hand on Cambridge, we will move into the top three.
Keep the Faith!
A

with Cambridge losing, the veggie burgers losing what a night,2points off the top Bolton gobsh&t are on a mad run could do with them losing a few, well happy with the game tonight to win the LG you have to win ugly and scrap at times think Nugent will take some time having not played for 18 months but every game he should get better, lovely strike from Feeney 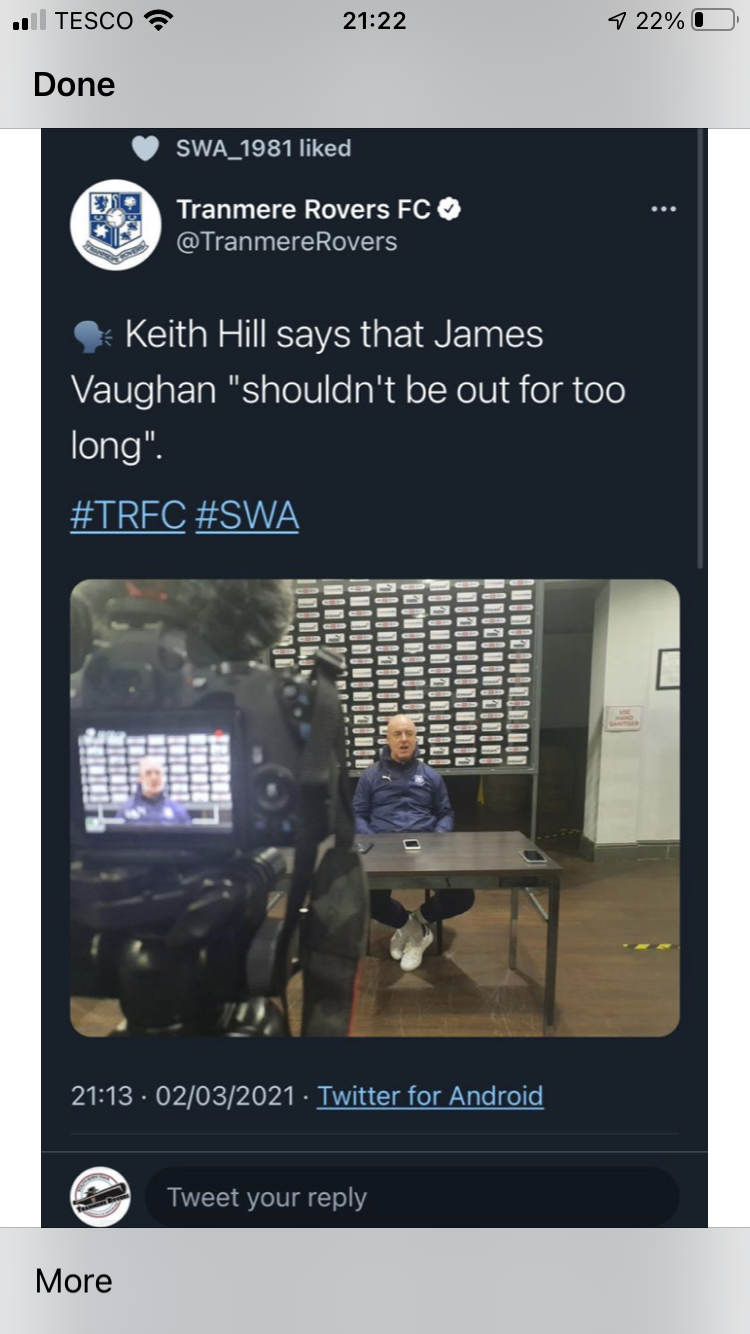 I thought Nugent showed some nice touches, but it was difficult for him to make his comeback in such a physical game, with the ball in the air a lot of the time.

Rockfords Love Child said:
I thought Nugent showed some nice touches, but it was difficult for him to make his comeback in such a physical game, with the ball in the air a lot of the time.
Click to expand...

Yes I agree. I was a bit critical of him but it was probably the most unsuitable game he could have played given the opposition plus he’s hardly played in the last 18 months.

Due to technology issues I only saw the opening half hour and the last 15 minutes, which was very frustrating. Good start and well-taken goal from Feeney, but after that the game was very scrappy and in the end the result was more important than how it was achieved. Liked Alex Hay's stint in the commentary box

Yes, I liked Alex Hay. I prefer it when the summariser is more restrained and measured.

Yes I thought Hay was good. Think Clint Hill was due a longer stint but now he’s at Bristol rovers with Barton I’m guessing he won’t.

back to the raving madman on Saturday!

Great performance from Rovers in terms of dealing with the opposition. We knew it wouldn't be free flowing football, but it was important we got a goal which we did nice and early and then were excellent at keeping Newport out. Defensively we hardly put a foot wrong. Clarke and Ray were solid, heading everything out. Spearing was excellent throwing himself into tackles and we now seem capable of managing the game, making it difficult and frustrating the opposition. Scottie hardly had a save to make such was our defending and concentration.

Nugent did a good job considering his complete lack of football and competitive games. I'd like to see him more involved as he brings bags of experience and I think he can help those around him.

It just keeps getting better for Rovers and look at the table now, it's great to see. There's a real good battle developing at the top and we are the form team right in the mix. Who would have thought that after 10 games under MJ!
A

aldoes mustache said:
imagine if KH had been in from the start we would be 10 clear
Click to expand...

Yes, that is my only regret at this stage.

I always had reservations about Mike Jackson’s appointment and agree that we’d have been better off with an experienced manager when Micky left. However, a manager coming in from the start may have recruited entirely differently and Keith had had the benefit of working with Dawes, who Jacko brought in, along with Parky and transformed things after MJ was axed.

In reality we’ll never know how big a difference there would be if Keith had been there from the start. Just grateful the current management team are getting the team headed in the right direction and with a real prospect of promotion.

Given that Palios and Steve Beck seem to be hands on with recruitment now, and Hill has extensive knowledge of this division, it is reasonable to assume the recruitment would have been of a similar quality last summer. Similarly, Hill worked with a completely different coaching team when he had his considerable success at Rochdale.

I still believe we would be well clear at the top if Hill had been here all season.
You must log in or register to reply here.
Share:
Share
Menu
Log in
Register
Install the app
Top